Last Friday marked 90 years since the first publication of Winnie the Pooh – first published on 14th October, 1926.  I think that this timeless classic has stood the test of time because of its endearing story, situated in the Hundred Acre Woods, and because each character is unique and distinctive.  I never get tired of Pooh’s wise words and poetic aptitude.

A.A. Milne named the characters in the story after his son, ‘Christopher Robin’ Milne and his toys Winnie (the Pooh), Piglet, Eeyore, Kanga and Roo and Tigger.

The New York library has just had the original toys restored for this special occasion, excluding Roo, who was lost by Christopher in the woods near his home during the 1930’s. They live there on permanent display if you would like to visit them.

Click here to read the official Press Release that outlines each toy’s procedure.

Winnie the Pooh has a long history.  Originally known as Edward the Bear in stories prior to 1926, he was renamed ‘Winnie’ when his son named his own bear after a real black bear that he used to visit in the London Zoological Gardens. ‘Pooh’ was actually a swan in earlier stories, but somehow the names amalgamated before the 1926 release.  The longevity of Winnie the Pooh is also attributed to Disney purchasing it’s rights after A.A. Milne’s death, which has lead to many shorts, movies and cartoon releases, together with DVDs and a mass of merchandising.  In the literary world Winnie the Pooh appears in everything from Board Books through to academic texts that analyse life through character assimilations based on the story.

Christopher Robin Milne wrote two memoirs on his association with the books written by his father.  I have not read them but apparently he was not too happy about all the fuss.

However, this is really a celebration of A.A. Milne and his talented writing skills that have stood the test of time. Winnie the Pooh is a perfect book to read to children, then later on a great book for children to read on their own, and even for adults to reminisce.

And here is a BREAKING NEWS story :  Egmont Books are releasing a new book called ‘Winnie the Pooh : The Best Bear in the World‘ written by Brian Sibley which will introduce a new character – a penguin !  Sibley saw a photo of A.A. Milne and Christopher Robin which included a toy penguin which he used as inspiration. 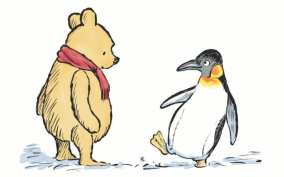 2 thoughts on “Winnie The Pooh by A.A. Milne”